the face of evil, Dick Dastardly 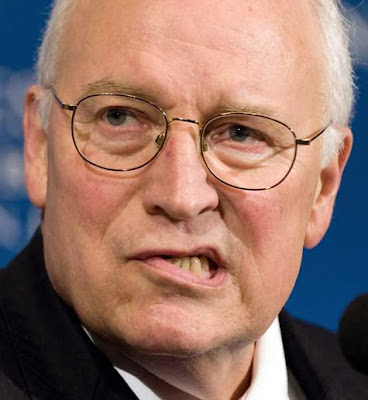 All that is missing is the Simon Legree's top hat and cape, and Snidely Whiplash's moustaches; or the horns, hooves, barbed tail, and pitchfork. Remember there was a character called Dick Dastardly?

Dick Cheney is the most evil man in US history. People once often pointed to Charles Manson as the embodiment of evil; he had his followers kill nine people, and his planned race war (or what ever the hell it was) was only a demented fantasy. Cheney worked years to achieve access to the greatest earthly powers. He has the blood of hundreds of thousands on his hands.

There are several [more than can fit to mention in this short essay] vignettes of episodic evil with cheney. He was all for the Viet Nam war, he got five deferments to make sure he didn't go. He stopped filing when he turned twenty-six, and was too old to be drafted. As he said, "I had other priorities in the 60's than military service. I don't regret the decisions I made". In August 2002 he told the world, through a speech, that the country was going to war with Iraq. Mid-March, his then puppet, gwbjr did start it on the false premises that had been invented, and no voice to the contrary was going to be respected. Often cheney was reported hiding "in an undisclosed location". That was bullshit too.

Cheney got drunk while hunting and shot his buddy, Harry Whittington, in the face. The local sheriff was told to go away. He had his buddy publicly say to the world, that it was own fault that he, himself, got shot.

While living in Tejas, he was head of Halliburton. Halliburton invented hydraulic fracturing, 'fracking' (exclusive patent 1949), later cheney as vice-president planned in secret with the oil companies on energy policy. Cheney had made sure over the years the government gave contracts to Halliburton. Halliburton, under cheney, did business with the "axis of evil countries" such as Libya, Iraq, Iran, and et cetera. O, and constitutionally a president and his vice-president must come from different states. gwbjr was from Tejas. Cheney decided the best running mate for gwbjr was cheney.

We all know he is "heartless", recently he received an human heart from a dead person. He has put out a book about the marvels of such medicine, he does not consider the dead man.

Recently, Madiba, Nelson Mandela died. Cheney considered him a "terrorist". Cheney was in Congress in 1986, when Congress over rode a Reagan veto for the US to stand against apartheid, and for the freeing of South Africa's political prisoners. Naturally, he voted with Reagan and against the world. He has no regrets about it, nor anything he has done.

Cheney was always on the wrong side of history, yet he is always a lying talking-head on television, and is quoted in papers and magazines. He has planted stories, and then commented to reporters on what those stories he "read" said. This thread of duplicity has been constant. He outed Valerie Plame as a covert CIA spy, other people have gone to prison over that sort of thing.

Laws don't apply to cheney, and his kind. He is an international war criminal, and in some countries he could be arrested, hell, if other countries followed his suit, he could be captured (extraordinary rendition) and tortured (water boarded) in a real undisclosed location. He approves of such activities. It would be poetic justice.

Let us not forget his spawn. One is a lesbian and has been in a public spat with the other daughter, Lizard Cheney, who lives in Virginia and feels entitled to be senator from Wyoming. She speaks the same evil as her sire, but has not much accomplished. She had been a paid liar on Fox, and before that the bushes had created positions for her in the federal government.

I remember a priest telling a story of how he refused a family's request of having "My Way" played at a funeral. See, a Christian is not supposed to be prideful in himself. A Christian is supposed to follow the Way of Jesus. Lucifer lost Heaven for his pride of having his way. Cheney, and Lucifer always made it sure they could say "I did it my way". Cheney was always self assured while lying, and wrong. He has never regretted anything, not even his lack of political etiquette. He told Senator Leahy, on the Senate floor, "go f@$# yourself". Leahy had criticised cheney over Halliburton (his source of mammon). Cheney had no regrets, he went on radio and said, "That's sort of the best thing I ever did".

Some people posit Hitler as the face of evil. It must be "sweeps week", one of the local television news stations is promoting a piece by that name, face of evil. They show a wax head of Hitler. Hitler had a sense of satanic theatre, cheney is blood thirsty, manipulative, but not theatrical. All men die, when cheney croaks, the sound of a colossal sizzle will emanate from Hell.
at 12:01 AM