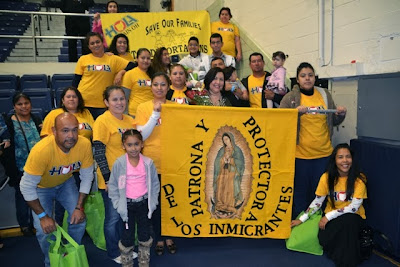 Before 1890, there was no federal immigration entity. Immigration was transferred from one federal department to another from 1890 onward. The last transfer was to this terror induced creation called "Homeland Security". Immigration Act of 1891 gave the Treasury Department a Commission of Immigration, it went through several departments: Commerce and Labor 1903, Labor 1913, and Justice 1940. From 1933 the constituent agency in those departments was the United States Immigration and Naturalization Service (INS). For years, resident aliens went to the post office to pick up an alien address card, fill it out, and mail it in; so that addresses were on file. Often, people had their child (often born in this new country) go to the post office and get the card. The child growing up in an English speaking world, would be familiar with the term "alien" from the picture show, and later television, and wonder why in his every other encounter with that word, it would be in the context "Killer Aliens from Mars Attack Earth", or something else similarly stupid. Then one year it was no longer necessary.

Then later, Osama bin Laden, a foreign assassin well outside the country attacked America in a co-ordinated, and dramatically choreographed assault. This gave a new and extremist régime, which had usurped the government, the opportunity to re-organise the government and create a new apparatus as a response to 'terror'. INS as of March 1, 2003 was in this new cabinet department, and was divided into three new structures:  U.S. Citizenship and Immigration Services (USCIS), U.S. Immigration and Customs Enforcement (ICE), U.S. Customs and Border Protection (CBP). Yes, immigrant labor is to be filed with the attacks of assassins. This particular case, which has come to my knowledge, falls under the survey of ICE.

Years before, a DC-3, contracted with the United States Immigration & Naturalization Service (INS), on the morning of 28 January 1948, ignited over the hills east of Coalinga, California. It was overloaded by weight, and by passengers, and past time for a required, safety inspection. Woody Guthrie read the accounts in the papers, and was disturbed that the Mexicans were listed only as deportees. To him, it was as if, it was a parting final insult. Guthrie composed a poem, that later became a song [click]. Two full generations later, how far have we advanced?

Immigrant labor is not respected in this country. Romney said, "corporations are people". He lied, labor is people; people that are taken advantage of, and discarded. Now we have a legal Democratic government, and they are deporting even more people. Politics, and the force of bureaucracy overrules people. This new power was created by fear. 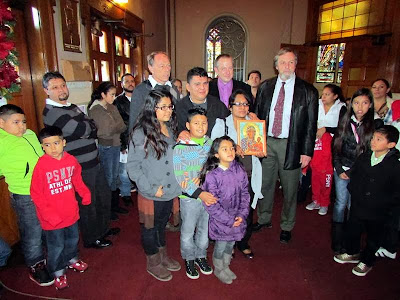 Ricardo Ramos [center] with family and friends at St. Casimir Cleveland
Ricardo Ramos has been a resident nurseryman in Lake County. He, and his wife, and their three children live in a mobile home park in Perry. He is been in the US for some 16 years. He was stopped while driving, and his papers were not in order. Since coming to Ohio, he has become a father to three children whom were born citizens, or as some would say "anchor babies". The pay he exchanged for his labor, is not great. He and his family have given more to the economy than they have received, but that is the system. The government wants him out of the United States before the crystal ball hits Times Square, and the calendar turns.

The family has asked for the intercession of Our Lady of Czestochowa, and Cleveland's St. Casimir community. They became aware of the Miracle that the parishioners of St. Casimir believed happened. On the day of eviction, the parish was dedicated to Our Lady of Czestochowa. A parishioner had a dream that Our Lady asked him (and them) not to leave. After 139 Sundays praying outside the church, as a parish community, they again got to go back inside. The right to return.

In this time of the year, the days of Christmas, many are guided by emotion and introspective conscience to be charitable to those caught by misfortune. This season beckons to men and women of good will to intervene. This is the lesson that the great novelist, Charles Dickens, wished to convey to the disinterested whom would have the powers of the establishment deal cold-heartedly and perfunctory for those in misery. A Christmas Carol is always with us, in Dickens' tale the Ghost of Christmas Present told Ebenezer, that he had over 1800 brothers; now he has over 2,000.

This family is part of our community, and has been for years. This is a cry for mercy, and justice, so that a family may stay united. This benefits not only one family, but our society as a whole.  Perhaps, a quick television spotlight and investigation can stir some human response for mercy and justice. The power of a presentation on television focuses attention, and interest on a subject. Those at Saint Casimir's were aided by the occasional audio, video, and print story. This story of the Ramos family can also benefit by media coverage. We know the powers of the establishment sometimes change course if they are shown the light (or are embarrassed).

WEWS TV-5 has run three recent stories, one on Sunday, December 22nd at 6 pm; another on Christmas Day at 11 pm; and a third yesterday at 11 pm [click]. If anyone can appeal to a Representative, or a Senator, or the President, or someone who can intervene, please do so. If Ricardo Ramos leaves, ask for intervention so that he can return.
_________________________
postscriptum 2 January 2014:  "Congresswoman Marcy Kaptur, with help from Rep. David Joyce have secured another two-week stay for Ricardo".
postscriptum 3 p.m. 16 January 2014:  "ICE [immigration police] has informed David [Leopold, attorney] that they will not be picking up Ricardo, as the decision is pending. We don't know how long it will take. It could be tomorrow, or next week."
at 1:56 AM