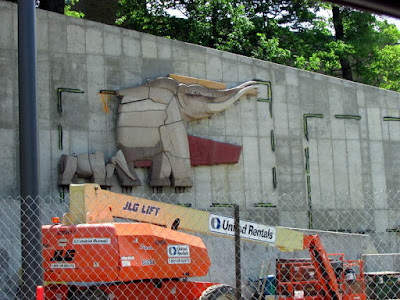 A wall before Cleveland's Natural History Museum has the places sketched out for Victor Schreckengost's terra cotta sculptures that had been on the outside walls of the Cleveland Zoo's Pachyderm building. The building was razed, and the mastodon and woolly mammoth sculptures have been in storage.
at 3:31 PM No comments: 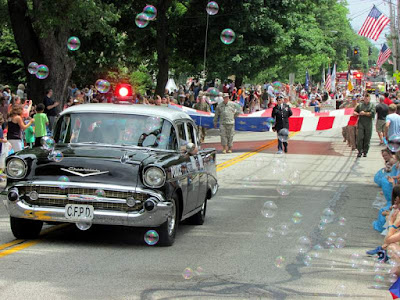 The area of Cleveland now called 'Slavic Village' is in shambles. It is nationally known by journalism reports to have been hit hard by the housing/mortgage fiasco. Many buildings have been demolished, there are many empty lots, other buildings are vacant, some have been torched, others are condemned and are awaiting removal. The major roads cutting through the neighborhood were and are terrible. Some of those roads have seen long needed resurfacing. Fleet Avenue is in a multi-year tear up, and has long been one way. So this year (the third) East 54th (between Fleet and Mound) had four houses open last weekend to see artists unleashed. I have a few fotos of the best outward presentation. 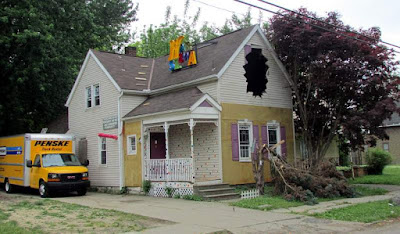 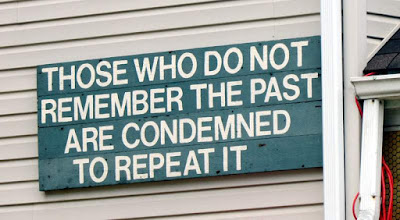 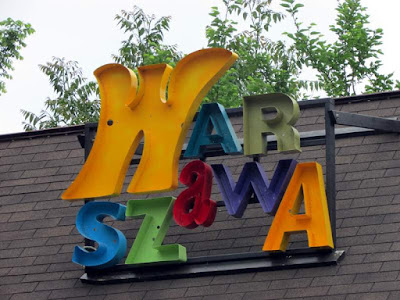 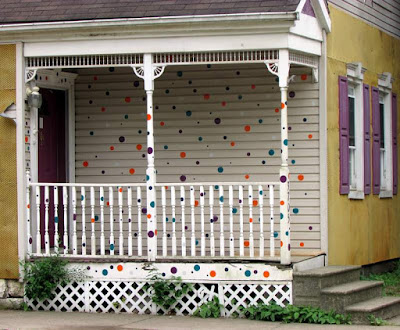 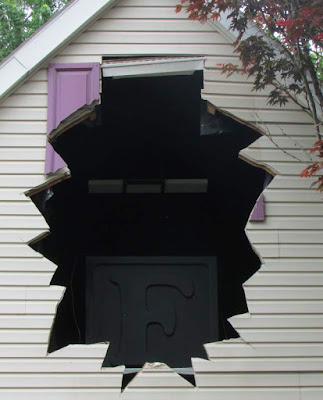 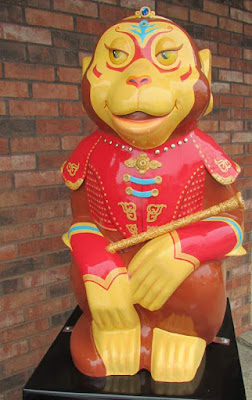 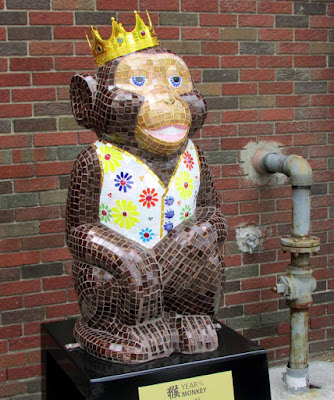 The 11th year of this public art project is on the east side of Cleveland. There are more and more interesting monkey statues than last year's rams. The Chinese zodiac begins with a rat, here the art began with a dog. There are variations, last year's goat became a ram. Next year is a cock, we will see what they shall call it.

The installation of these statues are meant to be seen for the Asian Festival which begins to-morrow. Cleveland's fest is slightly younger than this art project, but the statues do complement it well.
at 3:22 PM No comments:

To-day is International Migratory Bird Day. Yesterday, i went to the boardwalk at Magee Marsh in Jerusalem Township, Lucas County. It is a remnant of the Great Black Swamp, which had hindered settling in northwest Ohio. The place is famous for warblers, singing birds smaller than sparrows. On a good day, as Friday was (beautiful dry May day of average temperature and very little breeze) twenty different species can be seen, and maybe identified.

Photography is challenging. Points where birds were visible were choked with people at times, and a couple guys with bazooka and howitzer cameras, and occasionally tripods were barricades. The subjects are small birds, and most are very active in movement. The exceptions tend to be secretive. With many leaves and branches it is hard to focus in on one. The first good foto of one i took was the cover bird of this year's visitor guide, a chestnut-sided warbler.

Very few young people were there, and virtually all were Amish, some with birding books, and knowledgeable. Some people would answer your questions, and others ignored you completely. Outside the boardwalk, there was an eagle's nest. And of the few i have seen, at this one you could actually see the birds without field glasses. At other places, the forbidden zone was far greater. Beach and lake birding was quite poor this day. 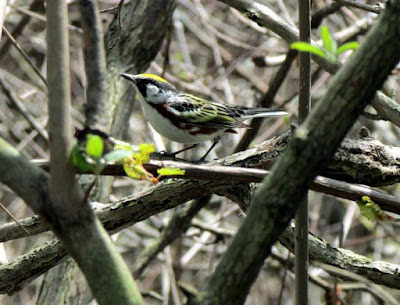 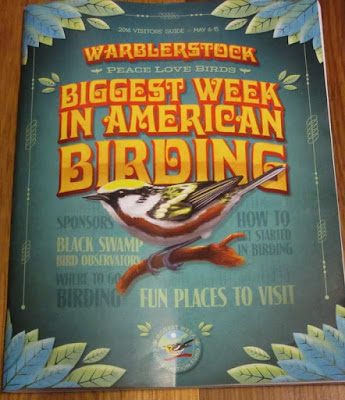 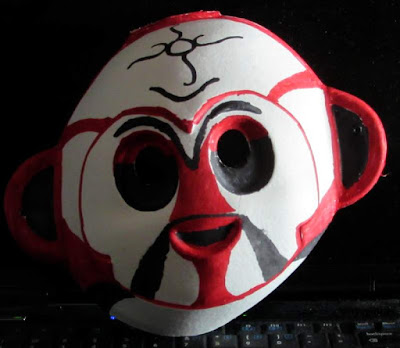 Hey, i really enjoy the Chinese zodiac statues that have been a public art project in Cleveland. This is their 11th year,and the Year of the Monkey. Some animals would lead to more art inspirations than others. I would think monkeys would be so. But, the group that co-ordinates this has seemed to lack continuing enthusiasm. It was very hard to find them on the net. The only thing i found was an interview on the public radio station.

Their first year, they painted forty fiberglass dogs. Most of the other years they had twenty four or five statues. Last year the dropped to seventeen rams. Well, just to-day i see there is a link [click]. Since the sponsors and locations seem to be regulars, the surmise may be sponsor recruitment and retention.

I wanted to do one, but am not in the art community. The rules included no religious messaging, but this is Asian culture where Asian religious traditions are integrated in culture and art. So, one can get away with that.

I thought of the Hindu monkey god, Hanuman, and the Chinese monkey king, Sun Wukong, whose weapon was a six foot pole. And i see by the link, twenty one statues are listed, and two of them are monkey kings.

My idea was based on a face of Sun Wukong in the Beijing Opera, and wearing red and yellow suit. I had found the template monkey and it did not suggest a dramatic pose. It looked more like a bell hop without the cap, or an organ grinder's companion.
at 7:51 PM No comments: 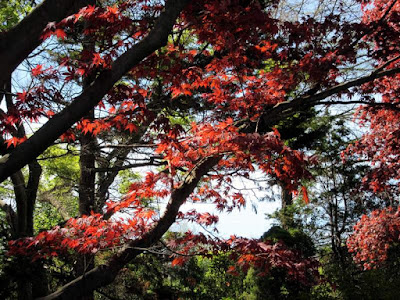 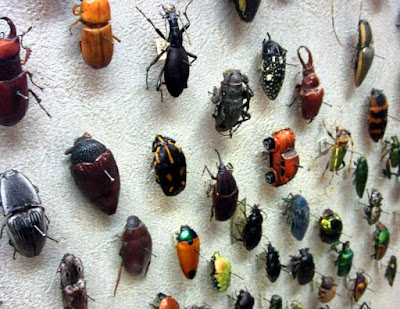 Not everyone likes bugs, but there are many colorful beetles. Certain people have a sense of humour. At Cleveland's Natural History Museum, someone pinned an orange toy car among the beetles. Volkswagen's original automobile has been called that for a long time. Nearby there is a collection of bird nests and eggs, someone there put a tiny foiled chocolate 'easter egg' in one. Now, these are not the showstopper displays, they are quietly in the hall of the basement. Humour is where one finds it, and it is good. If i were to guess, and i am, i would say it is a 'Hot Wheels' or 'Matchbox' originally orange, and now burnished up. A fellow put his foto [click] of this same subject to the public, and it went national proly international on the innerwebs. I saw the foto, and remembered seeing it, and wanted to snap one myself.

I went to the museum to see the Poison exhibit from the New York museum. I especially wanted a shot of MacBeth's weird sisters, but the lighting available from a little camera does not do the best dramatic effect. The neatest display is the enchanted book of herbal poisons, whose pages tun and rewrite themselves [slide show magic]. The museum is busy now: an addition is under construction, new animal shelters are built, the outdoor guardian [earlier post] dinosaur has returned with a new paint job. It is made from the same cast as the original one from the New York World's Fair of 1964. There is a promise of Schreckengost's terra cotta pachyderms to be mounted on a finished wall. 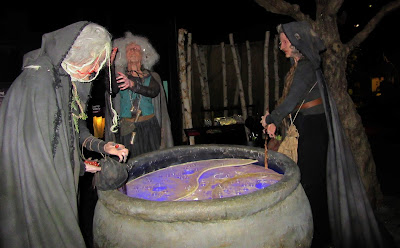 Some of the ingredients were described on display cards, but the script was not quoted at length. Some of the Bard's remarks are not socially polite these days in certain circles. At least when i went, there was no sound effects--which would have been really cool. They missed the boat on this one.
[Thunder and lightning. Enter three Witches]
First Witch
Round about the cauldron go;
In the poison'd entrails throw.
Toad, that under cold stone
Days and nights has thirty-one
Swelter'd venom sleeping got,
Boil thou first i' the charmed pot.
All
Double, double, toil and trouble;
Fire burn, and cauldron bubble.

Second Witch
Fillet of a fenny snake,
In the cauldron boil and bake;
Eye of newt and toe of frog,
Wool of bat and tongue of dog,
Adder's fork and blind-worm's sting,
Lizard's leg and howlet's wing,
For a charm of powerful trouble,
Like a hell-broth boil and bubble.

All
Double, double, toil and trouble;
Fire burn and cauldron bubble.
Third Witch
Scale of dragon, tooth of wolf,
Witches' mummy, maw and gulf
Of the ravin'd salt-sea shark,
Root of hemlock digg'd i' the dark,
Liver of blaspheming Jew,
Gall of goat, and slips of yew
Silver'd in the moon's eclipse,
Nose of Turk and Tartar's lips,
Finger of birth-strangled babe
Ditch-deliver'd by a drab,
Make the gruel thick and slab:
Add thereto a tiger's chaudron,
For the ingredients of our cauldron.
at 8:35 AM No comments:

It's official—Trump is THE presidential loser